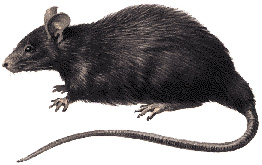 Color: Brown with black intermixed; gray, white or black underside
Shape: Long and thin with scaly tail; large ears and eyes
Size: 6-8 inches not including the tail
Region: Coastal states and the southern third of the U.S.

The roof rat – also called the black rat or ship rat – is smaller than the Norway rat but causes similar issues, including gnawing through materials, carrying diseases and contaminating food. The roof rat is thought to be of southeast Asian origin, but is now found throughout the world, especially in tropical regions.

Roof rats are primarily nocturnal. They live in colonies and prefer to nest in upper parts of structures or in trees. They forage for food in groups of up to ten and tend to return to the same food source time after time. Roof rats follow the same pathway between their nest and food. Their runways will be free of debris and may also have dark rub marks where their fur makes contact.

Historically, roof rats and their fleas have been associated with bubonic plague. Though transmission is rare today, there are still a handful of cases in the U.S. each year. Roof rats can also spread typhus, jaundice, rat-bite fever, trichinosis, and salmonellosis. They can also carry fleas and mites.