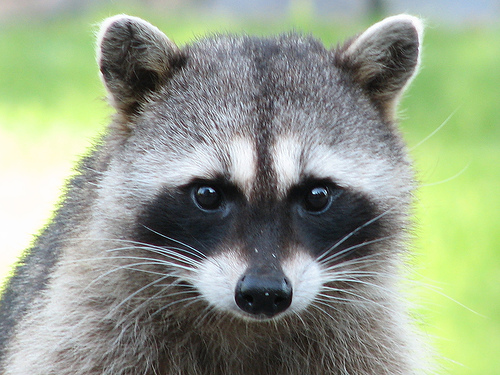 Color: Salt-and-pepper gray and black with a prominent black “mask” over the eyes
Legs: 4
Shape: Stocky with a heavily furred, ringed tail
Size: About 2 – 3 feet in length
Region: Found throughout the U.S.

Raccoons can be found throughout the U.S., but are more common in the wooded eastern portions of the country than in the more arid western plains. Raccoons are rarely seen during the day because of their nocturnal habits.

Raccoons are omnivores and will eat plants and other animals, including fruits, berries, nuts, fish, frogs, insects, turtles, mice, rabbits, muskrats and bird eggs. Raccoons usually have one litter per year, which is usually born in late spring or early summer. One litter may contain between three and five young. Raccoons can live as long as 12 years in the wild. Raccoons do not hibernate, but they do live in dens and become inactive during severe winter weather.

Raccoons prefer to live in forested areas near a water source. Although commonly found in association with water and trees, raccoons can be found around farmsteads and livestock watering areas. Raccoons den in hollow trees, ground burrows, brush piles, muskrat houses, barns and abandoned buildings, dense clumps of cattail, haystacks, or rock crevices.

Raccoons are a major host of rabies in the U.S., especially in the eastern part of the country where their populations are increasing. They can also cause property damage around homes and outbuildings, especially when they try to enter homes through attics or chimneys, which they are also known to use as denning sites. In some cases, raccoons have torn off shingles or boards to gain access to an attic or wall space. Raccoons often raid garbage cans in search of food, and sometimes kill poultry, destroy bird nests, and damage gardens or crops.