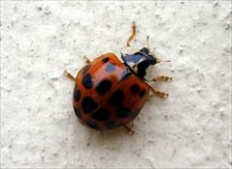 Ladybugs are also known as lady beetles or ladybird beetles. Most species of this beetle family are highly beneficial insects, but some have a habit of overwintering in structures, leading them to become nuisance pests. Ladybugs are found worldwide with about 475 species located in the Unites States and Canada.

Many ladybug species are considered important beneficial insects because they voraciously consume plant-eating insects, such as aphids, mealybugs, mites, and scale insects, which harm crops and plants in gardens. However, a few ladybugs are destructive and feed on plants, such as the Mexican bean beetle and the squash beetle.

During the spring and summer months, ladybug populations typically grow because the seasons favor tender foliage and aphid infestations. In the autumn, adults seek protected places to overwinter including under leaves, rocks and landscape timbers. Other ladybug species are known to inhabit structures such as buildings and homes.

Most ladybug species do not pose a health threat to humans. However, the multi-colored Asian lady beetle is known to aggravate asthma and cause allergic reactions in some people, a strong reason for ladybug pest control. In addition, they exude a viscous yellow, foul-smelling defensive fluid that may stain whatever it contacts.