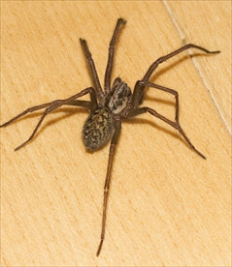 The common house spider is usually the spider most often encountered indoors. It is a nuisance pest, probably more because of its webs than the spider itself. This spider is found worldwide and is common throughout the United States and Canada.

The house spider randomly selects its web sites and creates a tangled web. If a web does not yield prey it is abandoned, another site is selected, and a new web is built. Survival is low in modern homes with low humidity and few insects, higher in garages, sheds, barns, warehouses, etc. because of more prey and generally higher humidity, and highest outdoors in protected places.

Inside structures, house spiders are most likely to be found in upper corners, under furniture, in closets, angles of window frames, basements, garages, and crawl spaces. Outside they are often around windows and under eaves especially near light sources which attract prey.

House spiders are nuisance pests but pose no threats to humans.