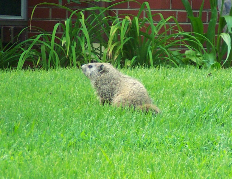 Color: Generally grizzled, brownish gray, but white and black groundhogs have been seen
Legs: 4
Shape: compact, chunky bodies covered in fur with a short tail. Their bodies are supported by short, strong legs. In addition, their forefeet have long, curved claws that are well adapted for digging burrows.
Size: The total length of the head and body averages 16” to 20” (40 cm to 51 cm). The tail is usually 4” to 7” (10 cm to 18 cm) long.
Antennae: No
Region: Northeastern and Central U.S.

The groundhog, also known as a woodchuck or whistle pig, is a member of the squirrel family. Although groundhogs are slow runners, they scurry quickly to their dens when they sense danger. The primary predators of groundhogs are hawks, foxes, coyotes, bobcats, dogs and humans. However, motorized vehicles kill many groundhogs each year.

On February 2, people around the United States celebrate Groundhogs Day, a tradition that centers on the idea of a groundhog emerging from its hibernation to “predict” the weather. If the groundhog sees its shadow and returns to its burrow, there will be six more weeks of winter. But, if the animal does not see its shadow, then spring is right around the corner.

Groundhogs are primarily active during daylight hours, usually feeding in the early morning. They are strict herbivores and eat a variety of vegetables including soybeans, beans, peas, carrot tops, alfalfa and grasses. When not feeding, they are known to sunbathe during the warmest periods of the day.

Groundhogs are among the few mammals that enter into true hibernation, which generally starts in late fall near the end of October and continues until late February.

In general, groundhogs prefer open areas to create burrow systems. Specifically, they can be found burrowing in fields and pastures, along fences and roadsides, and near building foundations or the bases of trees.

Groundhogs are known as a nuisance pest because they can cause extensive damage to home gardens, farms, orchards and field crops as a result of their feeding and burrowing habits. When burrowing, they have been known to destroy building foundations, create unwanted holes on lawns and cause electrical outages from gnawing on underground wires.

Groundhogs rarely come in contact with humans and therefore pose no major public health hazards; however, they are capable of carrying fleas, ticks and rabies.