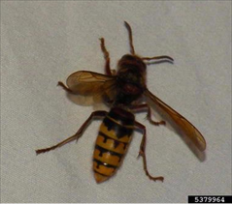 This hornet (also called Giant hornet) gets its common name from its introduction from Europe into the New York area in the 1800’s. European hornets are much larger than yellow jackets and unlike most stinging insects, can be active at night.

European hornets are social insects and live in colonies that may contain between 200-400 members at their peak. They usually appear in late summer. They prey on a variety of large insects such as grasshoppers, flies, yellow jackets and honeybees. They also eat tree sap, fruit, and honeydew. European hornets are attracted to light and are known to repeatedly bang on lighted windows at night.

European hornets nest in hollow trees, barns, out buildings, hollow walls of houses, attics, and abandoned beehives. Unprotected nests are usually covered in a brown envelope made of cellulose from decayed wood.

European hornets can do a great deal of damage to trees and shrubs because they strip the bark to get to the sap. They also use the bark fiber to build their nests. They have smooth stingers, so they can sting over and over again. Hornet stings also carry venom that makes the stings hurt, itch, or swell for about 24 hours. A European hornet sting has the same risk of allergic reactions as with other insect stings.