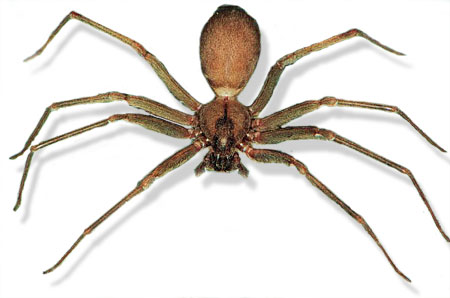 Color: Tan to dark brown
Shape: Round, usually with darker violin shaped marking on dorsum
Size: 1/4 – 1/2 inch long
Region: Found in the Central Midwest, from Ohio to Nebraska and south through Texas and Georgia

Brown recluse spiders get their common name from their coloration and reclusive habits. They typically run for cover when disturbed.

Brown recluse spiders feed on small live prey such as insects. Outside, brown recluse spiders are typically found around rocks, utility boxes, and woodpiles or under bark. Indoors, they can be found in any undisturbed area, such as inside boxes, among papers, in seldom-used clothing and shoes, under furniture, or in crevices such as baseboards and window moldings. Closets, attics, crawl spaces, and basements are the most common hiding areas.

Both female and male brown recluse spiders can bit and inject venom, making them a danger to humans. The bite is usually not felt, but results in a stinging sensation followed by intense pain as long as six to eight hours later. A small blister usually develops at the bite location that can turn into an open ulcer. Restlessness, fever, and difficulty sleeping are common symptoms of a brown recluse spider bite.