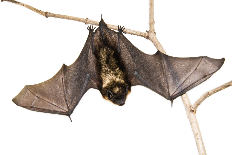 Color: Varies in shade from tan to black
Legs: Four legs used for crawling; Front two are used as wings
Shape: Body covered with hair; Two wings and very large ears
Region: All, with the exception of colder regions beyond the limit of tree growth
Size: Depending on the species, adult bats average 2 3/16″ to 7 ½” (5.5cm – 18.8 cm) in length from nose to end of tail. They have a wingspan of about 6″ to 15″ (15.2cm – 38 cm).
Antennae: No

There are more than 980 species of bats worldwide with about 40 species found in the United States. The three most common species that enter structures are the little brown bat, the big brown bat and the Mexican free-tailed bat.

For centuries, bats have been the subject of folklore and myths, often associated with witchcraft, haunted houses and evil. These myths still exist today and cause unfounded fear in many people.

Bats are nocturnal flying mammals that leave their roosts at dusk to feed and return to secluded dark places just before daylight. Most species are active during the warmer months and hibernate and/or migrate for the winter season. However, they do not fly in rainy or unseasonably cold weather.

Big brown bats: Female big brown bats form nursery colonies in the spring and are joined by males in late summer. They leave their roost at dusk in a slow, fluttering flight to find food. They feed close to the ground on various insects including beetles, ants, wasps, flies and mosquitoes.

Little brown bats: This species forms nursery colonies in early spring, then migrates south in autumn and hibernates in irregular clusters from September through April. They feed on insects, primarily flies and moths, and alternate their feeding with rest periods during which time they hang to digest their food.

Mexican free-tailed bat: This species migrates to Mexico for the winter, usually leaving in late October and returning in March. They feed on insects, eating up to 1/3 of their body weight each night.

Different bat species living across the United Stated roost in dark secluded areas of buildings and in naturally protected areas like caves.

Little brown bats: This species roosts in tree cavities and crevices during the warmer months and seeks shelter in caves and mines to hibernate.

Mexican free-tailed bats: This species usually lives in huge colonies where the young are raised. In the southeast and on the west coast, these bats can be found hiding in structures, but from Texas to Arizona they seek shelter in caves.

Bats can pose a serious health threat to humans if they are found inside a structure. Fungi that harbors in bat droppings can cause the lung disease, histoplasmosis. An accumulation of droppings should be professionally decontaminated and removed.

A small percentage of bats are also infected with rabies, but may not show symptoms. Rabies can be transmitted when saliva or even the body tissue of an infected animal comes into contact with another animal or human. Therefore, it is important to seek medical attention if you’ve had any unprotected, physical contact with a bat.

In addition, if an infestation develops, it is important to treat the area for bat mites and bat bugs, which will bite humans.