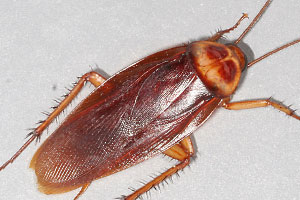 Color: Reddish-brown with a yellowish figure 8 pattern on the back of the yead
Shape: Oval
Size: 2 inches long
Region: Found throughout the U.S. and the world

Although American Cockroaches can be found in homes, they are also common in larger commercial buildings such as restaurants, grocery stores, food processing plants, and hospitals. They are known to infest food storage and food preparation areas, as well as basements, yards, and alleys. They often enter structures through drains and pipes.

Cockroaches have been reported to spread at least 33 kinds of bacteria, six kinds of parasitic worms, and at least seven other kinds of human pathogens. They can pick up germs on the spines of their legs and bodies as they crawl through decaying matter or sewage and then carry these onto food or food surfaces.